Welcome back to our second Monday Devlog! What do you mean it's not Monday? Anyway, today we'll look at graphics and performance in the Early Access version of the game.

I've seen many people worried whether upgrading to UE5 would have any effect on the performance of the game, especially on low end systems. And it does. A good one :)

The UE5 version is dramatically faster, across all levels of graphics quality and all hardware. Most of these improvements come from significantly improved support for DirectX 12 in the engine. We will be setting it as the default in future releases after more testing.

You're likely wondering about the performance on common hardware, so let's start with the game running on a GTX 1650. I'm running in a 1080p window without temporal upscaling, and using the maximum view distance setting.

In this full view of a 2 million brick build, UE4 only gets us 34 fps.

What if you like to use a bigger monitor? I'm now running the game in 2560x1440 fullscreen with temporal upscaling enabled from 50% resolution scale, still running on the GTX 1650.

In this different view of the same build, UE4 gets us 58 fps. It's certainly playable.

This build has 4 million bricks, but most of them are off screen. UE4 only gets us 38 fps.

Those results are quite promising! But what if you're stuck on even lower end hardware? Will UE5 make you unable to play the game entirely? Quite the contrary!

To see how low we can go, I've compared the two versions of the game on the worst computer I could find around the house - a laptop from 2012 with a 1.8Ghz dual core and Intel HD 4000 graphics. It has a 1080p screen, which seems a bit high for this little power, so I reduced the resolution scale a bit.

UE4 still only reaches 19 fps on this laptop. No good!

Let's conclude this test by comparing the performance on a top-end computer equipped with a RTX 4090 GPU and Ryzen 7950X CPU. I'm using a 3840x1600 ultrawide monitor here, with temporal upscaling enabled.

With almost 5 million bricks on screen in this city, UE4 only gets 99 fps.

From this view into 4 million bricks, UE4 only gives us 108 fps.

Unreal Engine 5.1 replaces the simple shading setting we've been using with an entirely new performance mode built into the renderer. This comes with an implementation of clustered forward lighting, so you can finally see lights in the world when using it!

For absolute lowest-end hardware, there is still an option to disable lights entirely.

For example, compare this view with Virtual Shadow Maps disabled:

To this one with Virtual Shadow Maps enabled. The shadow of the railing is much clearer:

Enabling them increases both the shadow detail and frame rate.

Remember how in the previous post I mentioned that we might one day be able to fully support Lumen Global Illumination? We're still quite far from that being possible, but it turns out there is an intermediate step. I'm calling it Proto-Lumen. It's basically Lumen but all the off-screen info is still missing.

The result is much nicer shading than previous SSGI at slightly higher performance cost. Combined with the overall performance improvements, running with Proto-Lumen in UE5 is still faster than without it in UE4 used to be.

For example, take this interior rendered with SSGI:

Really can't get enough of its nice shading. It looks so pretty!

Among many other changes, I've finally gotten around to upgrading the glass material so it actually looks like... glass. That was long overdue. It also looks really nice now.

Coloring the glass correctly tints the world behind it.

With all these awesome new graphics features, you'll probably want to take more pictures of your builds than ever. But there's still something missing... it's a way to focus the camera on specific parts of the build! So now there's a way to enable and adjust depth of field in the game. It's mostly a standin for a fully-featured photo mode, but it looks so nice already!

There are still more features in Unreal Engine 5.1 that we will be making use of, such as the Iris replication system. More on those in future blog posts! I hope you enjoyed this preview of our graphics and performance upgrade...

and if you are on your phone, I hope you were using wifi :) 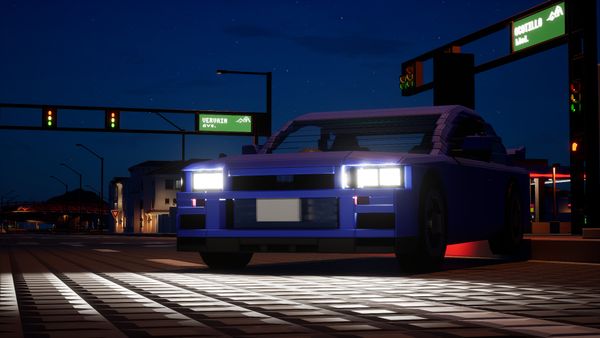 Join us for a (very) early look at upcoming physics contraption features, and some general improvements to placing objects that aren't really bricks. 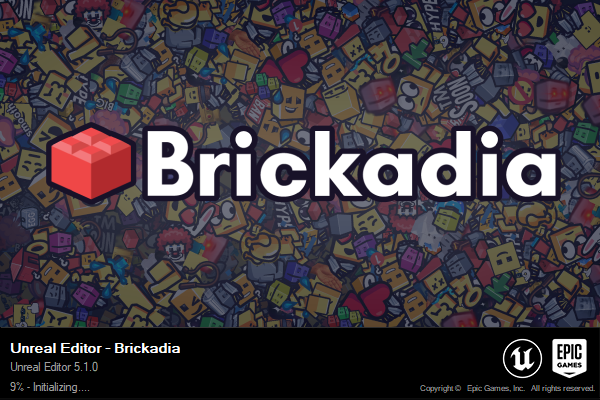 Starting off our new dev blog series with a jump to the future - Brickadia will be using Unreal Engine 5.1 in Early Access. Read on for what it took to get there.